our makers and restorers

Stamford Strings works with the best makers and restorers from around the world, including exciting and upcoming makers. 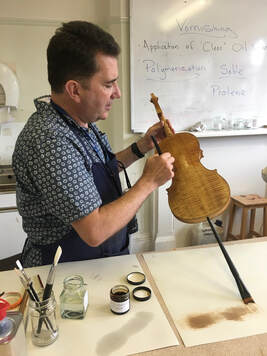 Peter Smith apprenticed at Ealing Strings of London in 1978 at 16 years old and apprenticed as a restorer working on classic Italian and English instruments among others . He then started violin making before enrolling at the the Newark School of Violin Making in 1985 to study and become a Viola /Cello Maker . After graduating, he moved to Manchester as a Restorer and Maker, specialising in violas for members of the Halle orchestra, including the lead Viola player, among others. At that time, he based his model on an Italian Maker, Andrea Guarneri, and over the coming years modified the instrument for size and to meet the requirements of contemporary playing and acoustic response.

Later in his career, he became a Teacher at the Newark School of Violin Making and Restoration and is currently the course leader and has his own workshop outside Newark in a small village . He still specialises in violas, and the current model he makes is of his own design, whilst maintaining the influence of the Guarneri model, combined with Stradivarius' models and English makers such as Forster and Parker, modernised to meet the requirements of the current time. His new model reflects his extensive experience and many of the concepts he developed over time, including current viola making within the trade, reflecting the requirements of the player, but in his own inimitable style.
​
Stamford Strings is delighted to have been commissioned to sell one of Peter’s violas. It is designed to have large lush deep sound with strong projection and has an aged finish with some simple inlay reflecting aspects of English practice.
This model can be 'sized' the suit the player from 15'' to 16 1/2''. Click here​ to view a gallery of photos.

Born in Rothenburg ob der Tauber, Germany, into a musical family, Anja started to learn the violin at the age of seven. At 22 she qualified as a nurse and followed a hospital career for four years. At the same time she continued her violin studies, first in Bavaria and then with Professor Ronald Masin at the Young European String's School of Music in Dublin.

In 2003 she decided on a career change. After work experience with violinmaker Michel de Hoog in Dublin, she was awarded a place at the Newark School of Violin Making. Since graduating in 2006 she has been working for professional workshops and private clients as a freelance repairer and restorer. For seven years she taught violin at St Hugh's Prep School in Woodhall Spa, Lincolnshire.

Since early 2018 she has been employed as a restorer at the Royal Academy of Music looking after the instruments of the collection. She especially enjoys working with a group of other violinmakers, and has restored some of the violins Stamford Strings has for sale, and several that we have sold in the last year.

Nigel trained at Newark School of Violin Making for four years, graduating in 2004 with an Upper Merit.

For fifteen years prior to attending the Newark School of Violin making he was employed by charities as a care and project worker for people with different ranges of disability. During this time, he developed his craft skills at home, making & repairing a variety of wooden & metal items and tools. This led him to take up a post in a professional violin workshop in Newbury, Berkshire, owned and run by Philip Brown. Through his guidance, he learnt to set-up and do basic repairs on instruments of the violin family and was encouraged to study at Newark.

Upon graduating from there, he set up his own workshop at home, where he lives with his wife and four children. He has sold many instruments mainly through London shops and Philip Brown in Newbury. In 2018 he was accepted into the Cremona 'Triennale' Violin Making Competition, where he submitted a violin and a viola. Both instruments achieved a high mark. As well as being a maker, Nigel has long been involved in the education of new makers. He worked as a technician for many years at Newark work before becoming a teacher at the Newark School of Violin Making and currently leading the Foundation Year.

He is inspired by the classic Cremonese makers of long ago and produces meticulous and refined work. Over the last fourteen years his practice has led him to specialises in specific models of instrument; violins in the style of Stradivari, Amati and Guarneri and violas in the style of Benjamin Banks, Guadagnini and A. Guarneri. Click here to view his violin and here to view his viola. 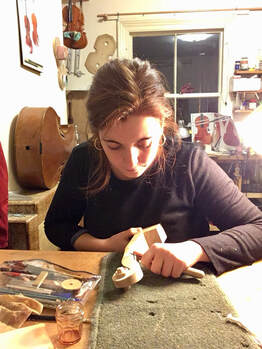 Ludivine studied four years of making, repair and restoration at The Newark School of Violin Making from 2016 - 2020. During this time, she was offered work experience in Europe as well as North America with distinguished makers including Markus Laine, Philip Brown, Alexandre Breton, Helen Michetschläger, Mathias Bailly, Pascal Cranga, James Beatley and Neil McWilliam. This vast range of experience in different workshop helped her developed her skills and learn different aspects of the trade.
During her last year in Newark, she received many accolades including a French bursary “ Fondation Marcel - Bleustein Blanchet “  for her 'cello making. She also received the “ Colin Garett - Progress Prize “ which award the student who made the most progress during their studies.
Since receiving her  diploma from the NVSR in 2020, she is continuing to gain experience in various workshops in Amsterdam and London.

Her work is distinctive and bold with a breadth of style that reflects her varied experience. Click here to view her violins.

Kyle is originally from South Africa with a great passion for restoration and making of Bowed Stringed Instruments such as Violin, Viola, Cello and their Baroque counterparts. He started his love affair with the violin at the age of 16, when he began studying the instrument. Through his devotion to playing, his interest for the stringed instrument family grew and eventually led him to researching into the history and mechanics of the violin. After studying many books and practicing repairs on student instruments, Kyle was determined to make his first instrument – a violin in the style of Antonio Stradivari. By the end of 2017, Kyle achieved this goal, which gave him the motivation to pursue this as a career and therefore seek a formal education in the violin making world. In 2018 he was accepted to studying a BA Hons in violin making at The Newark School of Violin Making and Repair where he is now in his third year of study. He is currently in the process of restoring a late 18th century violin, which was discovered in an attic in a castle in Scotland.

Kyle's work is meticulous and elegant and reflects his passionate interest in research. Click here to view his instrument. 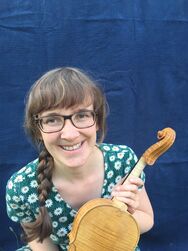 Caroline is a promising upcoming violin maker. In 2014 she started learning violin repairs as a hobby with Luthier Géza Burghardt in Vancouver, Canada. She soon realised that violin making was where her heart belongs. In 2016, Caroline set of to learn at the Newark School of Violin Making, from which she graduated in 2020.

​Caroline puts her focus on making new instruments. Her instruments reflect her remarkably fine and detailed way of working. Every step in the process of making is thoughtfully taken care of. 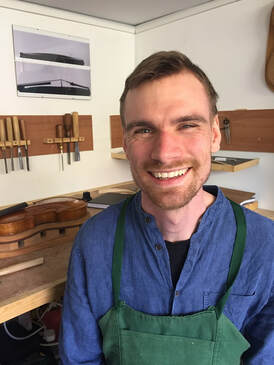 Hannes Dreyer is a dedicated violin maker and musician. He started playing the violin at the age of 7 and later continued to study violin at the ArtEZ University of arts in Arnhem, the Netherlands. Here, Hannes also started his career in violin making in 2016, learning restoration at Atelier Preyer. In 2020 he graduated from the Newark School of Violin Making. During his 4 years in Newark Hannes discovered his love for the making of new instruments. He committed himself to developing his skills to build new instruments on a high professional level.

"To me, the essence of being a musician is not too different from the essence of being a violin maker. Both engage in the art of creation. The violin player uses their bow and instrument to create a beautiful sound, while the luthier uses his tools and his feeling for the wood to create a beautiful violin. I enjoy combining my love for both of these art forms to try and create instruments with a warm, rich, well-balanced tone that will hopefully inspire musicians to express their own voice."

Julius Hennicke finished his training at the Newark School of Violin Making in summer 2019. He really enjoyed the nice atmosphere in the school and working with so many friendly people who are always up for trying out new methods and exchanging ideas. After having finished in Newark, he moved to Vienna to work in a workshop focusing on restoration and the maintenance of old instruments.

​The 'Cello Stamford Strings has been commissioned to sell was made during Julius’ last in the school. It is based on a model by David Tecchler who is especially well known for his beautiful 'Cellos. The materials used are spruce and Birds Eye Maple and the instrument is lightly antiqued. Julius had loads of fun making this 'Cello and hopes that it will bring its new owner just as much joy as he had when building it.

Born in 1977 Andrew spent his formative years spend working a learning the family business as artisan gun maker. As time went on, he diversified into making guitars and basses, which then led him to making his first violin in 2013. He completed a BA Hons in Violin Making and Repair at Newark in 2020 and has completed more than fourteen classical instruments to date.

​Stamford Strings has been commissioned to sell one of Andrew's 'Cellos, which is his own full size design, with a narrow waist for comfort, and arching developed for a full even sound in both high and low registers. 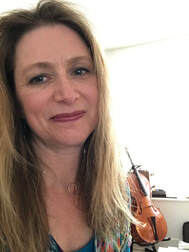 Libby Summers graduated from The Newark School of Violin Making in 2020 after four years of study. Prior to this she had a successful career as a knitwear designer and is a published author. As well as being trained in repairs, restoration, making and bow repairs, Libby is a violin teacher with over 20 years experience. Her depth of understanding of the instrument and student requirements enhances her making and servicing skills, and her ability to respond to client's needs and expectations.

When she is not doing something with violins, Libby can be found knitting, seeking out the best coffee in town, putting up shelves, writing, reading or running. She is a self-confessed yarn and caffeine addict. At the moment her collection of yarn outweighs her collection of violins, but that balance could soon tip the other way! Click here to view her instrument. 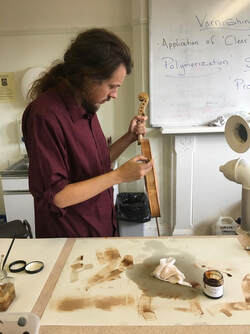 Theo Parmakis studied at Newark School of Violin Making (class of 2020.) He holds a long-standing interest in many types of musical instruments, and has recently been focusing on making cellos, building three over the course of his final year. At Newark, Theo also spent time on instrument repair and baroque-era construction techniques as well as bow re-hairing and repairs.

​Prior to attending Newark, Theo spent some time studying fretted instrument construction and maintenance including building a mandolin. He is also a keen folk music player and has taught the banjo for several years. Click here to view his instruments. 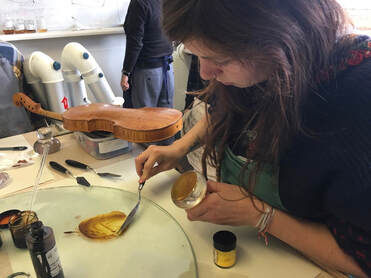 Fabienne graduated from the Newark School of Violin Making and Repairing in 2020. Over the course of the time in school she finished six violins. Through her love for experimenting with different varnish and set up techniques, all of them have their own unique look and sound. Being involved with several repair and restoration projects over the past two years also had an influence on her style of making. Doing work experience in Germany and Canada has nurtured her interest in bow repairs and re-hairing. For the future Fabienne hopes to create more stringed instruments with consideration of sustainability and our environment. Click ​here to view her instrument.